Resources are seldom distributed equally across space, but many species exhibit spatially synchronous population dynamics. Such synchrony suggests the operation of large-scale 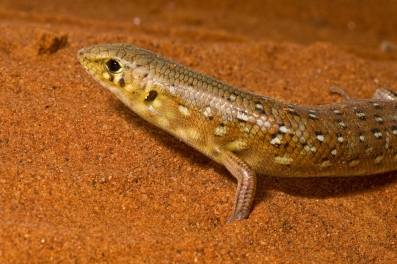 The panther skink (Ctenotus pantherinus) from the Simpson Desert, Australia.

external drivers, such as rainfall or wildfire, or the influence of oasis sites that provide water, shelter, or other resources. However, testing the generality of these factors is not easy, especially in variable environments. Using a long-term dataset (13–22 years) from a large (8000 km²) study region in arid Central Australia, we tested firstly for regional synchrony in annual rainfall and the dynamics of six reptile species across nine widely separated sites. For species that showed synchronous spatial dynamics, we then used multivariate follow a multivariate auto-regressive state–space (MARSS) models to predict that regional rainfall would be positively associated with their populations. For asynchronous species, we used MARSS models to explore four other possible population structures: (1) populations were asynchronous, (2) differed between oasis and non-oasis sites, (3) differed between burnt and unburnt sites, or (4) differed between three sub-regions with different rainfall gradients. Only one species showed evidence of spatial population synchrony and our results provide little evidence that rainfall synchronizes reptile populations. The oasis or the wildfire hypotheses were the best-fitting models for the other five species. Thus, our six study species appear generally to be structured in space into one or two populations across the study region. Our findings suggest that for arid-dwelling reptile populations, spatial and temporal dynamics are structured by abiotic events, but individual responses to covariates at smaller spatial scales are complex and poorly understood.