Posted on September 16, 2020 by Aaron Greenville 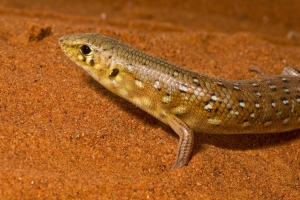 The panther skink (Ctenotus pantherinus) from the Simpson Desert, Australia.

A mulgara from the Simpson Desert, Qld, Australia.

(1) Diffuse competition affects per capita rates of population increase among species that exploit similar resources, and thus can be an important structuring force in ecological communities. Diffuse competition has traditionally been studied within taxonomically similar groups, although distantly related intraguild species are likely also to compete to some degree. (2) We assessed diffuse competition between mammalian and reptilian predators at sites in central Australia over 24 years. Specifically, we investigated the effect of dasyurid marsupial abundance on the diet breadth of three groups of lizards (nocturnal dietary generalists, diurnal dietary generalists and dietary specialists). (3) Nocturnal generalist lizards had progressively narrower diets as dasyurid abundance increased. The diet breadth of diurnal generalist lizards was unaffected by overall dasyurid abundance, but was restricted by that of the largest dasyurid species (Dasycercus blythi). Ant- and termite-specialist lizards were unaffected by dasyurid abundance. (4) Diffuse competition, mediated by interference, between dasyurids and nocturnal generalist lizards appears to have strong effects on these lizards, and is the first such between-class interaction to be described. Diffuse interactions may be widespread in natural communities, and merit further investigation among other disparate taxon groups that occur in the same ecological guilds.